Ask any generational farmer the story of their family land, and they’re likely to get emotional. Farmland is the foundation of the family business, and passing it down is just what’s done. So, when Peter and Beth Anderson* felt God calling them to engage in generosity by gifting their inherited land, they knew the decision would be difficult.

With the mindset that God owns everything and we are just stewards, in faith, the Andersons faithfully chose a different plan for leaving a legacy through the gift of real estate.

Both Peter and Beth grew up on farms in Kansas, and their roots run deep. Their two grown daughters don’t have the same connection to the land or a desire to farm it in the future. As Peter and Beth built their Giving Strategy™, they knew they needed to make important decisions about how they’d pass on the farmland.

Peter and his brother Mark inherited an undivided half interest in their father’s land, which means no one owner has a specific piece of the land, but rather a share (or “interest”) in the entire property. The brothers wanted to avoid their collective four children having to divide the land in the future, so they committed to making decisions while they were both living. This decision turned out to be more difficult – and more meaningful – than either imagined.

When Peter voiced his desire to give away his portion of the interest to charity, Mark wasn’t in agreement. He knew Peter and Beth’s biblical view on generosity, but he didn’t understand it or the decision. Because it was important to Peter to place his relationship with his brother above financial procedure, they kept brainstorming. They weren’t able to physically divide the land equally, and neither could afford to buy the other out.

With the possibility of capital gains tax laws changing, Peter and Mark finally came to an agreement: Peter transferred his 50 percent of the undivided interest to NCF, thereby reducing or eliminating capital gains taxes. Then NCF worked with Mark to jointly sell the property as a single purchase. Peter and Mark were able to manage the entire process, from listing the property to the final sale, which only took six weeks from start to finish.

While giving real estate helped Peter reduce taxes and send more to charities, he says the most meaningful piece was sharing his faith with his family through the process. Peter lived out his faith by prioritizing his relationship with Mark over money.

Plus, in the midst of an incredibly emotional and difficult decision, Mark saw Peter rely on the promise of God’s abundance as he gave the land back to its true Owner. Even God’s timing was perfect, Beth says. The delay in making a decision allowed their grandchildren to grow. Now 12 and nine, they are old enough to grasp the concept of giving to grow God’s kingdom.

A legacy of generational generosity

NCF has been instrumental in helping Peter and Beth use their blessings to mobilize resources for biblical generosity. Peter particularly loves the parable of the talents in Matthew 25:14–30. “It’s about our faithfulness and how we use the abilities God has given us, not the size or the significance of the abilities,” Peter shares.

Completing a Giving Strategy with NCF helped the Andersons sort through 70,000+ organizations to determine which causes are closest to their hearts. They’ve also added their two daughters as participants on their Giving Fund (also known as a donor-advised fund), so they can give alongside their grandchildren to build generosity into their legacy.

Peter and Beth expect other opportunities to gift real estate in the future and are thankful this recent experience taught them it’s possible. “We’ve been blessed to be a blessing. I want to be told, ‘Well done, good and faithful servant.’”

* Names have been changed to protect the anonymity of this family. 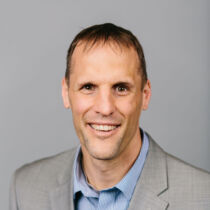 Matt is the president of NCF Heartland in Overland Park, Kansas, where he leads a regional effort with a strategic emphasis on the Kansas City metro area. Prior to NCF, Matt was Director of Operations at The Hope Center, a community development organization where he spearheaded real estate and economic development initiatives. He has served in the U.S. Air Force and is serving with Baseball Chapel as a chaplain to the Kansas City Royals.

How is God calling you to change the world?