I’m a philanthropy advisor who works with families, including NCF givers. As I was wrapping up 2020, I reflected on the bright spots I saw in the midst of last year’s challenges. I quickly thought of the generous families who gave strategically and joyfully – who made a difference despite everything going on around them. I’m reminded how important it is to grab hold of the joy in giving, especially now.

I was doing a philanthropy-planning session with a family who said they wanted to set aside an amount of money for spontaneous giving, above and beyond their strategic, long-term gifts. They wanted to be able to give to some things just because it made them happy. We decided that they would call it their “Smile Fund.” Their relentless pursuit of nurturing a joyful, generous spirit within their family inspired me.

While there is a joy or satisfaction in planning, analyzing, and putting together the metrics of a philanthropic gift, we sometimes need to look at the big picture above all of that. Sometimes the gift that brings the most joy is not the most strategic or the one that makes the biggest impact. It’s just one that hits a deep place in your heart. You know it’s the right thing to do.

It doesn’t just make you smile, it brings a preponderance of joy. I started asking some of the most generous people I know what has brought them the most joy in their giving. Here are some of the responses I received from families:

A gift of generosity

John* told me about a trip he took with his family to a country that is extremely under-resourced. They were traveling with an organization that they were funding and respected deeply. On their trip, they met a woman from a rural community who captured their hearts. While she had great needs herself, they discovered that this woman kept giving away anything she received so she could help others who were in greater need than she was.

Her family was trying to convince her not to be so generous, but she desperately wanted to help the people around her. John and his family knew what they wanted to do. They pulled together a sum of money, all the cash that they had, and they handed it to the woman. They told her that, because she was such a giving person, they wanted to help her with her generosity. They gave her the money to give away.

“For weeks afterward, I got text after text telling me about people living in incredible poverty and how she was giving to them,” John said. She was ecstatic about each gift, and, of course, so was I.”

A gift of relationship

One couple, Jeremy and Laura*, described an organization in Quito, Ecuador that they have given to for years. Of all the years they have given, their favorite was when they decided to fund repairs to homes that were inadequate to shelter families. “The joy came later in that year,” they said, “when we returned to Quito to visit the ministry.”

There, they met three women whose homes were repaired by their gift. “They spoke to us of how this provided a reliable shelter for their families, how it enabled them to continue to work and avoid debt. They told us about all the benefits to their children. It put a face and a story to the gift that was made,” Laura said. “The joy came from relationship!”

Adam* is a generous man who has made multiple legacy-forming gifts throughout his life. His generosity has inspired many, and I was so curious to hear, out of all the big gifts he’s given, which one has brought him the most joy. He barely hesitated before jumping into the story.

It was several decades ago. He had heard about the suffering of children in a war-torn area of the world. There were organizations providing food and shelter and so many vital necessities.

But the organization that captured his heart was the one that talked about the emotional toll on the children and how they have to cope in the midst of such struggle. They wanted to do something extra for the children. Roads into the country were impassable, so all supplies had to be air-dropped. This organization wanted to send soccer balls in one of the drops. Adam agreed immediately to fund it.

Though it’s been years, his face still lit up when he talked about those children, the details of the plane, getting the soccer balls there, and how much fun it was.

One mom told me this: “The greatest joy I experience in giving is when our family is like-minded and we share a common heart space about where we want to give. When we discuss various causes to support and we come to a unanimous decision about where to give, it warms my heart and brings a smile to my face. Knowing that we all have different motivations and knowing there are so many amazing causes, when the places line up for each of us to have an impact together, it brings me so much joy.”

An element of surprise

A donor we’ll call Ted told me that, while he has given lots of large and strategic gifts over time, he has found a profound joy in the gifts that have an element of surprise or subtlety. He talked about how much he loves to leave an outlandish tip at a restaurant to encourage the wait staff or pay for people anonymously when they are least expecting it.

He shared how much he enjoyed secretly funding a scholarship so somebody could go to a school that they otherwise would not have been able to attend, and another time he far overpaid for items at a fundraiser so that the non-profit organization and their personnel felt especially appreciated. He said, “Such fun memories! It never ceases to amaze me that the giver is seemingly every bit as blessed as the recipient of the gift.”

For the last 15 Christmases, Steve and Marie* found great joy in giving extra financial gifts to people around them. Last year, they gave to a longtime friend who is extremely sick and who needs help with a medical treatment that could prolong her life. They also gave other gifts like college tuition for a young immigrant friend and a financial gift to a friend who recently lost her husband and is facing serious financial hardships.

“We saw generous hearts modeled by my parents who blessed us with so much,” Marie says. “It is our desire to continue to model that legacy. There is a world of need, and we experience such joy in giving!”

A gift of giving instead of getting

Jeanine* described a gift that she and her husband made early on in their marriage. At the time, they wanted to make a significant gift to an organization, and they wanted to do something above and beyond what they had originally intended to give. They decided to increase their donation by adding in the money that was set aside in their travel budget – a considerable amount for this young couple who loved exploring places around the world.

They held off on any trips for three years, and donated it as part of the multi-year gift. Now, of all the gifts they have given, the one that they sacrificed for stands out as the one that brought the most joy.

“We feel an immense sense of joy when we give instead of getting for ourselves,” Jeanine said. With this type of giving, I know without a doubt, my full heart is in it. It is one thing to give out of abundance, it’s completely different when you give forfeiting something important to you.”

Whatever has brought you joy in your giving, my 2021 hope for you is that you are able to capture that spirit too. May your generosity continue to bless you and your family, and may you continue to impact the people and the causes that you value most deeply. And in the midst of all your strategic planning and thoughtful giving, just don’t forget the joy!

*Though the stories here are true, the names have been changed to protect the privacy of these givers.

**A version of this story first appeared on the National Center for Family Philanthropy blog. 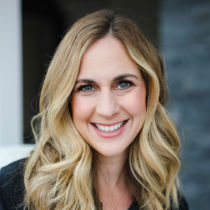 Heather Larson is the founder of LiveGive, a philanthropy advising firm that helps guide families and foundations on strategic giving. As a philanthropy advisor and a leadership consultant, she serves her clients based on wisdom gained through 22 years of non-profit leadership experience, including the American Red Cross, Willow Creek Community Church, and partnerships with more than 150 nonprofits around the world.