This year, as we celebrate the freedom of our country, we reflect on the biblical narratives of struggle, perseverance, and deliverance and celebrate the freedom common among us, which is found in Christ. These three stories of courageous Americans illustrate the power of faith in God’s Word coupled with works inspired by the Holy Spirit.

Richard Allen became a Christian at the age of 17, while he was still a slave. Though young, he preached and evangelized among his fellow slaves. When neighbors heard, they advised young Allen’s slave owner, Stokeley Sturgis, that allowing slaves to practice religion would lead to his ruin. So Allen worked to protect his master and prove them wrong by example – showing that faith improved, not worsened, a man’s behavior and work ethic. He and his brother dedicated themselves to faithful work.

His efforts were successful, and soon Sturgis was allowing preachers to come and teach slaves and free people in his home. Hearing a particularly powerful sermon, Sturgis not only became a Christian but also became convicted that God would find slaveholders and slavery as immoral on the day of judgment. He freed his slaves, and helped Allen to purchase his own freedom.

Allen continued to preach and to work as a free man, praying constantly. So dedicated was he to prayer and spreading the gospel that he would sometimes wake up in his sleep praying aloud and preaching a message. Soon, he was invited to preach in Philadelphia and did so – four or five times a day, starting at 5 a.m.! But in the church, Blacks were often segregated and mistreated.

By the time of Allen’s death in 1831, the AME Church had grown to nearly 10,000 members. Today, the AME has more than 6,000 churches and more than 2 million members. This could never have been achieved without Allen’s deeply held belief that every person, black or white, slave or free, deserves the right to worship – a legacy that his church still carries to this day.

From birth, John Quincy Adams was instilled with the belief that his destiny was inextricably linked to the fate of the United States. His hope was for the country to become the most just and free nation in the world.

But that freedom could not be established without the proper foundations for a moral and educated nation to flourish. This meant instituting laws and supporting philosophies that promoted peace, productivity, and a spirit of improvement. Most importantly, it meant promoting a vision of justice that resisted interference with any individual’s God-given liberties.

One of the greatest demonstrations of his commitment to this goal was his defense of a group of Africans who had been illegally captured by Portuguese sailors in their homeland and had arrived on the ship “Amistad” off the coast of New York. Adams led a group of Bible-believing abolitionists in contending that these Mendi people (one of the two largest ethnic groups in Sierra Leone) had been kidnapped and falsely imprisoned. They had the right to be returned to their homeland. The case was won, and the Mendi people were permitted to return home free.

“[America’s] glory is not dominion, but liberty. Her march is the march of the mind. She has a spear and a shield: but the motto upon her shield is, Freedom, Independence, Peace.”
– John Quincy Adams

Sojourner Truth was born a slave in 1797 and learned from her mother at a very young age about a God who heard her prayers. By the age of 13, she’d been sold twice and was alone, with no family. But she was also six feet tall and “strong as any man,” with a faith in God and an internal strength that would lead her to the calling God had for her.

In 1826, though she’d been promised freedom by slave owner John Dumont, and though the law in the State of New York, where she lived, would require she be freed the following year, Dumont wouldn’t let her go. So she packed her things, finished all of her work, picked up her baby and walked to freedom, leaving a young son behind.

Truth is powerful, and it prevails. – Sojourner Truth

She found safety in the home of a devout Quaker couple who taught her about the laws of the state, read to her from the Bible, and bought her freedom. With their help, she worked with attorneys to become the first Black woman to win a court case against white man – Dumont, who had illegally sold her son.

In 1843, Isabella had a vision. God was calling her to travel and teach the truth about Jesus Christ and the freedom he died to give us. She called herself Sojourner Truth and set out on foot with only coins in her pocket to become a powerful orator, abolitionist, and advocate for women’s rights. Her towering presence, her singing voice, and her ability to preach stunned audiences and convicted many of sin. Even among abolitionists she advocated for reliance on God. After hearing a speech by abolitionist Frederick Douglass, advocating for slaves to “sieze freedom,” she asked, “Is God gone?” She knew Jesus was the one who made her free.

During the Civil War, she encouraged African American men to fight for the Union, and after the War, she helped freed slaves to find jobs and build new lives. Abraham Lincoln knew of her work and welcomed her to the White House.

“The force that … brought her into the authority of public advocacy was the power of the Holy Spirit. Her ability to call upon a supernatural power gave her a resource … that transformed her from her from Isabella, domestic servant, to Sojourner Truth, a hero for three centuries at least.”
– Neil Painter 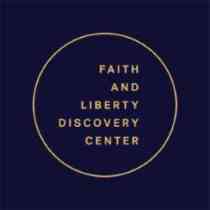 The Faith and Liberty Discovery Center is a new $60 million state-of-the-art, immersive, and interactive cultural attraction coming to Philadelphia’s Independence Mall in late 2020. A strategic initiative of the American Bible Society, their mission is to explore the relationship between faith and liberty in the American experience from the founding to the present by highlighting the influence of the Bible on individuals in key historical and personal moments.

Moving into the neighborhood