While there is broad agreement about the spirit of generosity, people differ (by age groups) when it comes to envisioning an act of generosity, according to recent research by Barna Group. This has implications for families.

Monetary giving doesn’t make the top of the list when it comes to perceptions about generosity. Service and emotional/relational support were the two most popular forms of generosity among American Christians, according to the poll. When asked about what actions they associate with the concept of “giving to others,” about one in five (22 percent) said “giving money.” Only one fifth of adults selected financial giving as their top expression of “giving to others.”

The findings on this question reveal some interesting gaps by generation: millennials, for example, are on par with the norm when it comes to service, emotional or relational support, and gifts. But the percentage of millennials who choose money as the greatest expression of giving is much lower. What they value is essentially the inverse of the older generations: millennials prioritize hospitality far more than money as an a way of to express their generosity. At another extreme are elders, who are much more likely than the average to strongly associate service with generosity (52 percent versus 32 percent), and not at all likely to choose hospitality (less than one percent of elder respondents chose this option). 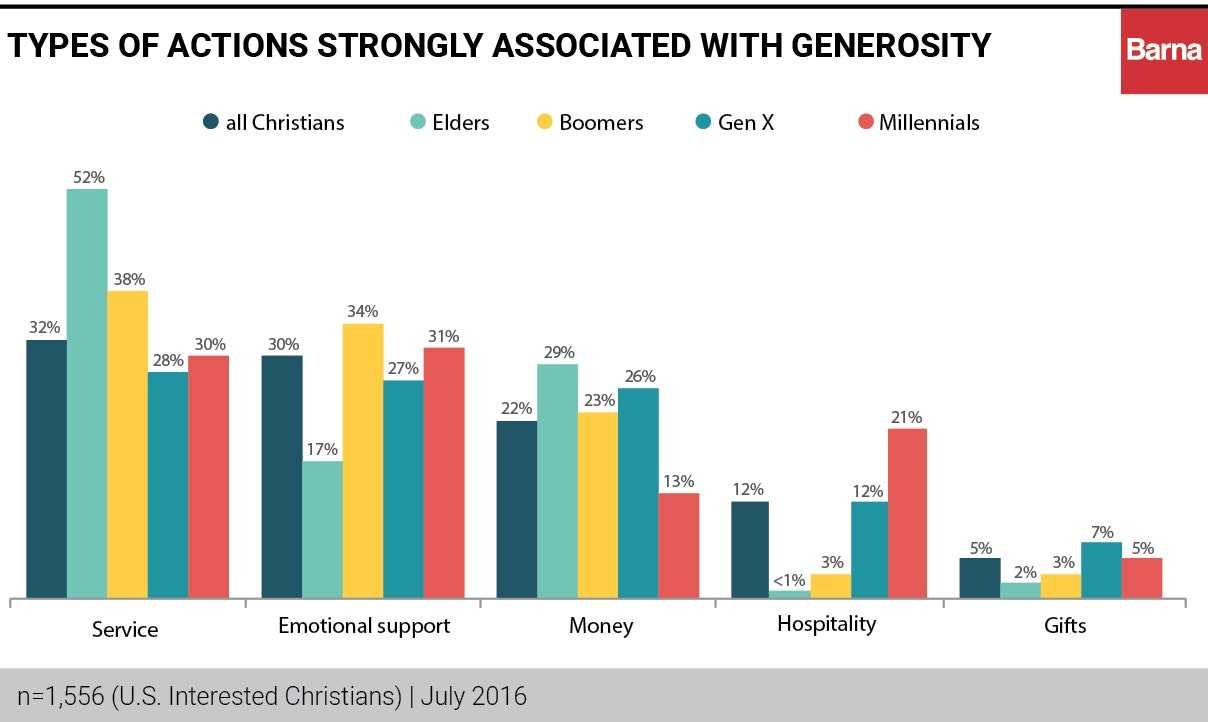 Researchers found that people most strongly associate their own chosen means of expressing generosity with their ideal of generosity. That is, if they believe monetary giving is the best way to be generous, they give money. If they believe serving is the best way, they tend to give through acts of service. Three out of five people who practice generosity by offering emotional or relational support to others generally associate acts of relational support with generosity.

This means, in a family that may have elders, boomers, and millennials making giving decisions, very different perceptions may be at play. Knowing what those differences are can help families work together with respect to each generation’s priorities.

Serving or volunteering and offering relational support are the most common expressions of generosity across generations, but percentages vary, likely related in some instances to free time and financial situation. Elders, for example – many of whom are retired or no longer working full time – are the age cohort by far most likely to report expressing generosity in service or volunteerism. And millennials, who tend to have fewer overall financial resources, are least likely to say they most often express generosity through monetary giving.


Though Americans prefer to serve others more than pull out their wallets, financial giving remains the easiest to measure. When asked to self-report their donations for the past year, the data revealed some interesting differences that matched expectations for age, churchgoing habits and marital status. For instance, younger adults tend to earn less money, to attend church less often (or not at all), and to be unmarried. And 84 percent of millennials report donating less than $50 during the past year, more than twice the percentage of elders who say so (37 percent). However, even though middle-aged and older adults tend to earn more, to attend church more often and to be married, their self-reported giving is only slightly higher.

According to analysis of data Barna gathered between 2013 and 2016, practicing Christians report giving an average (median) of $1,400 a year to their church – somewhere between three and four percent of their disposable income (based on the average US net income of $39,424). This isn’t much. The reason could be that out of 10 possible answers to the question, “What would you consider to be the ultimate financial goal in life?” the option “to serve God with my money” ranks at only number six among Christians.

A total of just one in 10 Christians chose that answer. Serving God with one’s money is, for most people, not as urgent as other priorities – though elders are twice as likely as others to say it is. Serving God was the number-one financial goal among senior Christians. The percentage of elders whose goal is “to have enough money to give charitably” is also higher than average (18 percent versus 11 percent of all Christians). “Providing for my family” tops the list among all Christians (22 percent), and millennials are more likely than the norm to select this option (31 percent). Since many young adults are starting their families (or at least contemplating it), it makes sense that this obligation would be on their minds. 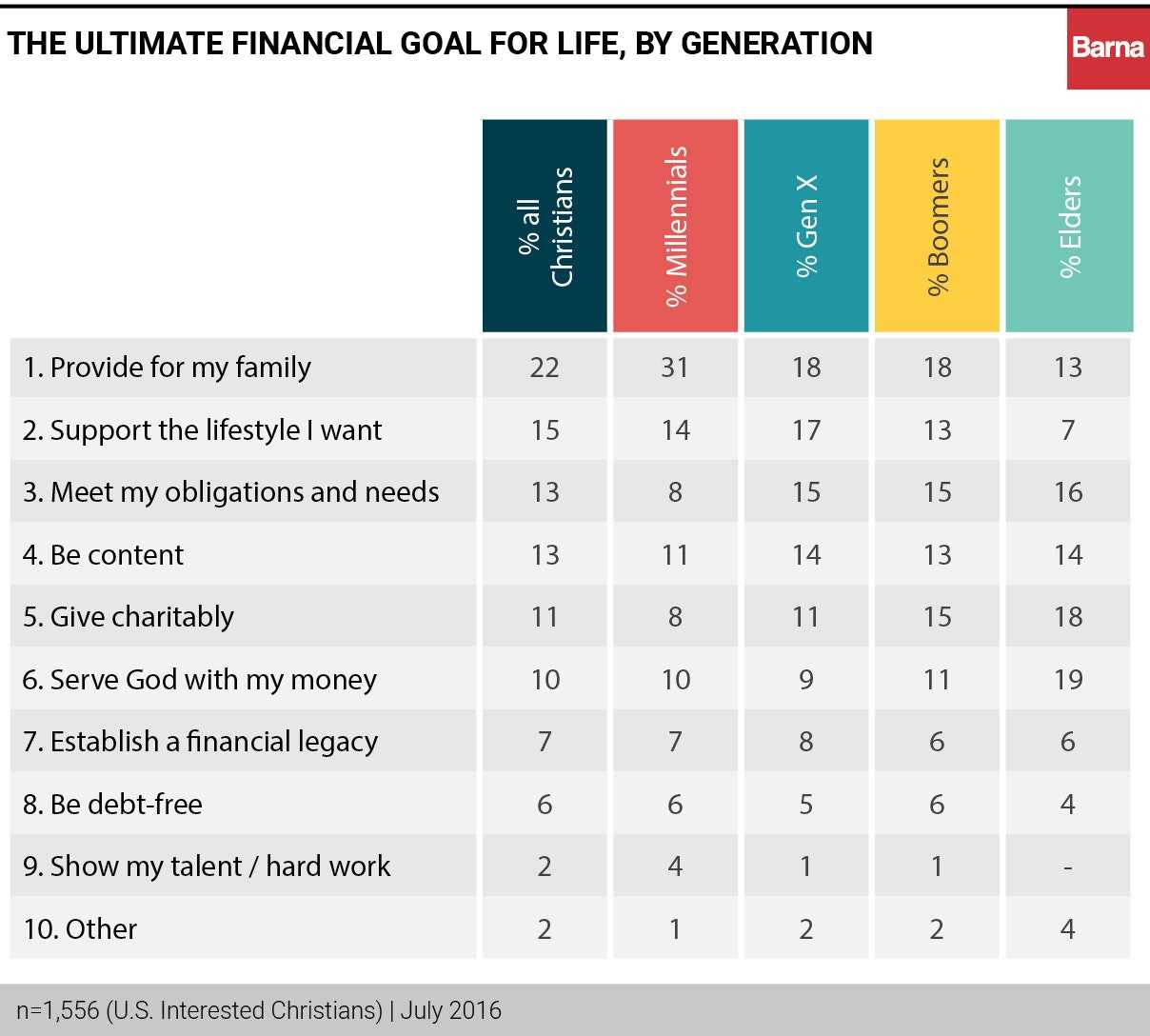 How generations perceive themselves

Barna found that asking survey-takers to view themselves through the eyes of another person often yields a more honest response. So we asked, “If your friends knew everything about your finances and giving habits, how would they rate your generosity?” Millennials are slightly more prone than their older counterparts to say their friends would rate them as very generous, while elders are least likely to say this.

How generations perceive each other

Barna asked Christians about the generations in their church congregation: which is most generous with money, time and hospitality? The answers reveal a high degree of generational loyalty among older Christians but less consistent perceptions among younger adults. The older three generations (Gen X, boomers and elders) believe that, out of all the age groups in their church, boomers give money most sacrificially – but among Gen X, only about one-third says so, compared to majorities of both boomers and elders. The greater part of millennials is nearly split on whether boomers or Gen X are most sacrificial in their giving, but one in five says their own generation sacrifices most when it comes to financial giving. Fewer than one in 20 among the older generations agrees. 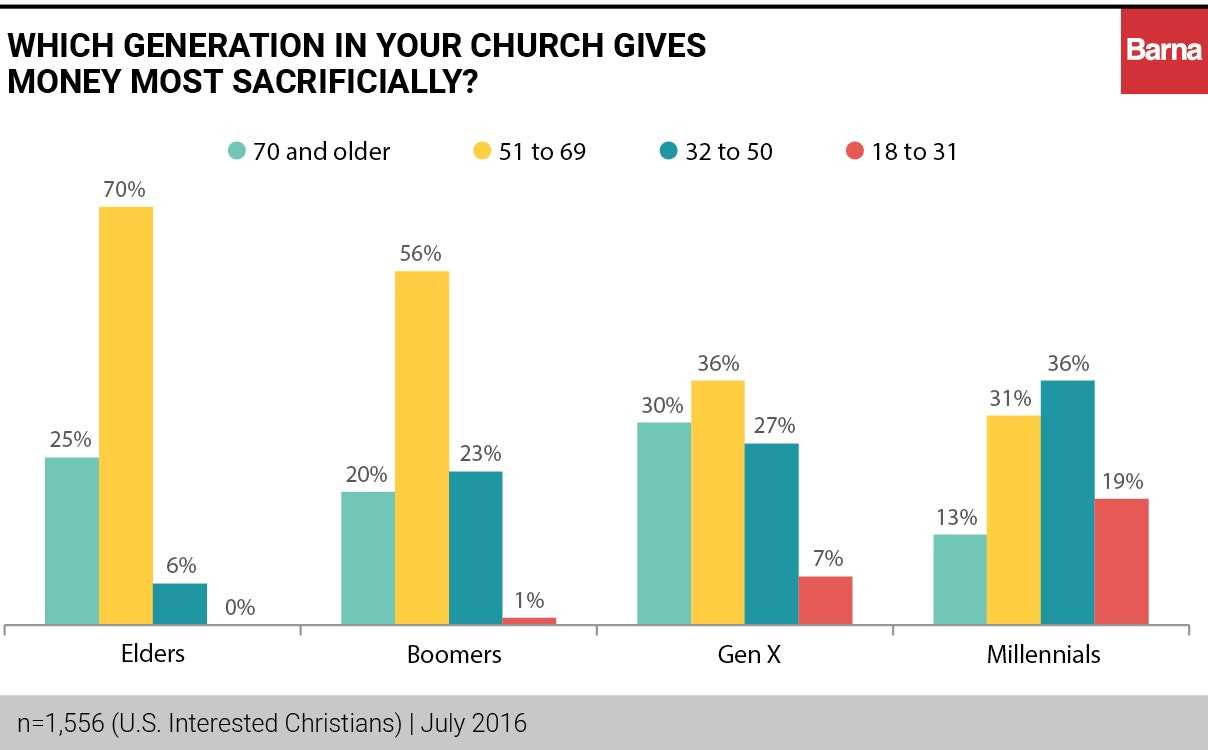 As with financial giving, most Christians perceive boomers to be most sacrificial with their time, and the percentage that believes millennials to be most generous in this regard shrinks in each successively older generation. Thirty-five percent of millennials say their age cohort is most sacrificial when it comes to time, compared to one in seven Gen X, one in 10 boomers and just three percent of elders. When it comes to hospitality, more than three-quarters of Christians over 50 say older adults are strongest in this area; two-thirds of Gen X agree that boomers and elders in their church are most hospitable. Millennials, meanwhile, consistent with their definition of generosity, give themselves the highest marks here. 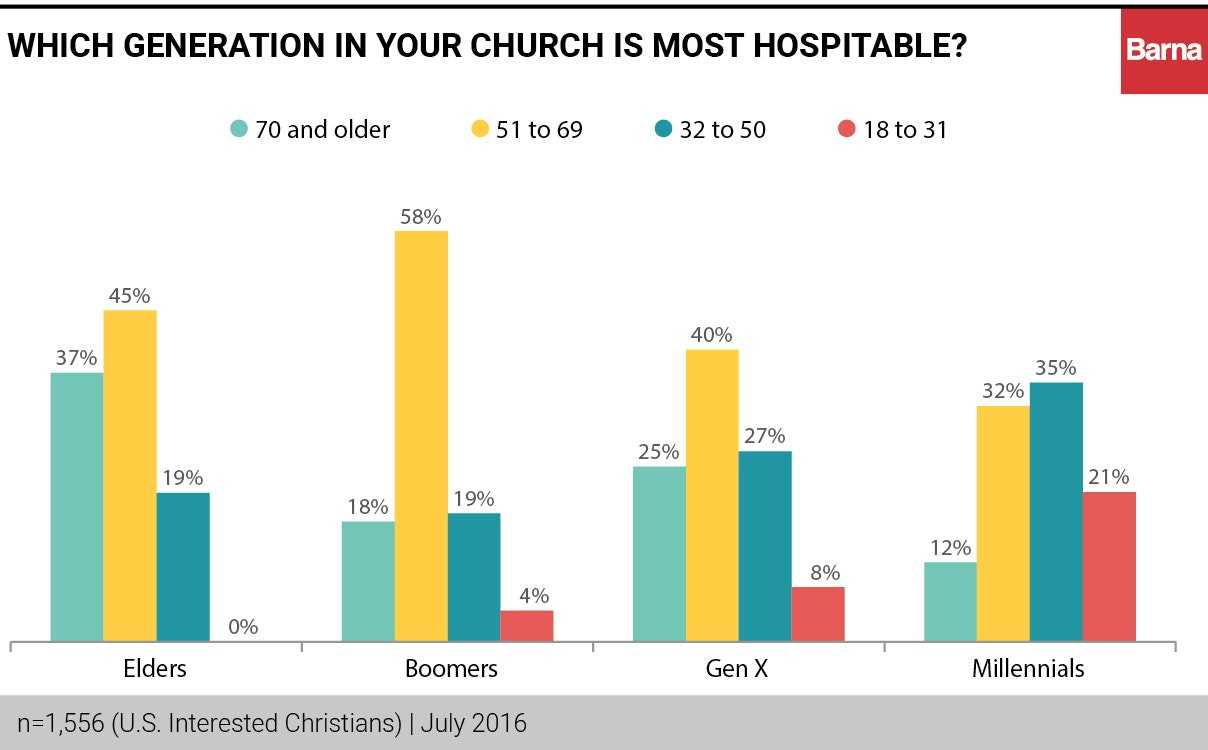 The religious and economic landscapes against which we live are changing, and we clearly don’t all agree about generosity. But if families are to survive and adapt to a changing reality, they need both accurate information and wisdom for applying reliable data to their particular context.

Use what you’ve just learned to strategize for the future and dream up fresh tactical ideas for how to connect the hearts, minds, and souls in your family with their potential giving strengths. If we understand and can talk about each other’s differences, family giving can be a much smoother ride.

Why nonprofits need to stop making a backup plan