Six weeks before COVID-19 hit, Kristofer Kasper didn’t know a thing about food distribution. But in March of this year, when his beloved East Austin community was hit, this real estate broker discovered that generosity is the mother of invention and that loving your neighbors might just lead to one of the greatest adventures of your life.

It all started with one phone call and a simple idea. “When my friends, Ben and Tiffany, had to temporarily close their restaurant due to the pandemic, they reached out to my wife, Heather, and me about buying gift cards,” Kris says. “But that just seemed like a BAND-AID to us. We thought, why don’t we buy meals instead?”

From that basic premise, the group of friends established the Love Thy Neighbor Fund to help cover the cost of meals at Ben’s restaurant, Gourmands Neighborhood Pub. Shortly thereafter, the effort grew to include Dale’s Essenhaus Restaurant and Zion Lutheran Church near Georgetown, Texas, as well.

At first, they weren’t even sure where the meals would go. But soon, they had connected with a church distributing food right around the corner, a senior center with 84 elderly residents who needed meals, and LINC Austin, an organization dedicated to feeding people experiencing homelessness. Almost overnight, a bridge had quickly formed to connect local restaurants, a church, and feeding those in need. 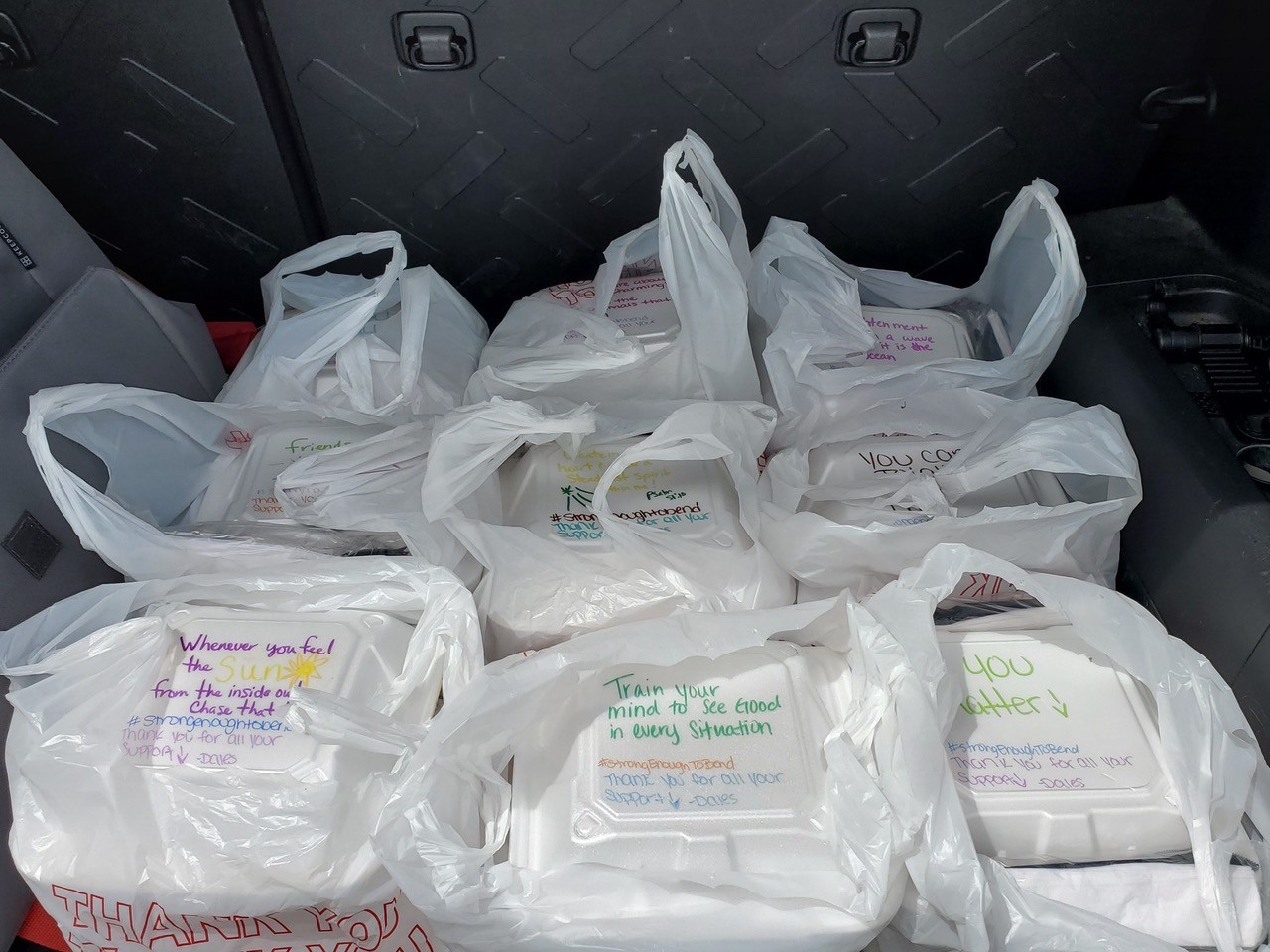 Dale’s Essenhaus Restaurant provides a hot meal with a message of hope.

“I literally asked the question to Heather on a Thursday afternoon, with no idea how it was going to work,” Kris says. “On Sunday, we got a basic plan in place with Ben and Tiff. Then, within a week, we had provided about 250 hot meals. I put the first tab on my credit card. Friends sent me money through Venmo, and people gave me cash and checks … all on a promise of what we intended to do.” And just like that, the Love Thy Neighbor meal program was born.

As the busy parents of three young children, Kris and Heather know the life-affirming power of a good meal, and they decided their efforts would be designed to bless whoever asks for one. “The meals aren’t just limited to those who are in financial need,” Kris says. “These are weird times, and people need emotional support. If someone asks for a meal, why not? People need hope.”

But as support for the operation grew, Kris needed help. “I was having difficulty tracking gifts, so I asked NCF for help,” says Kris. “Within a few days, they had set up a designated fund and a donate button that made it easy for people to give and really simplified things for me.”

As their wild ride continues, Kris and Heather are energized by the incredible generosity that they have witnessed. “We have seen families receive meals, and then turn around and pay it forward,” Chris says. “Even those who don’t have much are giving sacrificially to keep this thing going. It’s a take one, give one, mentality.”

Rapid growth can also bring its own set of issues, but God provided affirmation. Turning the corner off of a vacant street to his house one day, Kris ran into an unexpected traffic jam.  “I was frustrated by some things that had happened with the program, and then I got really impatient running into traffic. Shortly thereafter, I realized that the traffic was due to a long queue over a mile long to get food from the nearby elementary school. God was telling me to quit whining and look at the need.”

I got really impatient running into traffic. Shortly thereafter, I realized that the traffic was due to a queue over a mile long to get food from the nearby elementary school. God was telling me to quit whining and look at the need.”

One of the biggest boons happened when Kris’s own church got involved. “Before the shut-down happened, my church, Zion Lutheran, was in the middle of a $6 million building project. That’s a huge project for a little church like ours, a campaign that was over five years in the making.”

“We broke ground, then had areas halting construction. Then churches weren’t even meeting. We wondered what we could do to keep our congregation unified. That’s when we looked around and realized, this is exactly when a community needs a church. Never underestimate the hope component of food.”

So, Zion Lutheran started giving away meals, and that has led to getting to know their neighbors. Food has become the first touchpoint for their church to all kinds of residents throughout their area. The church encourages their members to both accept meals and groceries, and also to provide them to those who they know need help.

“People are seeing God’s hand of provision and love through their community and the church. It’s really a ray of light.”

Soon, as businesses start to re-open, their model will evolve to include wholesale restaurant suppliers. This will allow them to offer families a grocery box that contains enough meat, vegetables, fruit, eggs, and snacks for about six meals.

And even though the need is starting to outstrip the funds, they are not giving up because they believe the work is too important. “Never underestimate the hope component of food,” says Kris. “Food is big part of our community here in Texas … with barbeques, tailgating, and gathering at local restaurants. Give someone a hot meal, and that gives them hope.”

For more innovative ideas to help your community, be sure to check out 19 (more) ways to keep giving in the time of COVID-19.

Why the Coronavirus pandemic is philanthropy's big moment