You may not realize it, but Jeff Rutt has probably influenced your giving. As one of the first to confront the effects of toxic charity (which he learned about the hard way), Jeff helped change the conversation to include more dignity and sustainability.

Now he plans to influence a new generation of “hopefuls.”

In 1995, Jeff Rutt was eating dinner in the home of his friend, Leonid Petrenko, a Ukrainian pastor, when the conversation about containers of free aid from Jeff’s church suddenly shifted. It was in that moment that Jeff heard the question that would forever change the course of his generosity. Pastor Petrenko, never one to mince words, asked Jeff, “Isn’t there a way you can help us help ourselves?”

Jeff made an important realization that night: Charity can be toxic. “We were providing for physical needs, but we were hurting local businesses,” says Jeff. “And we weren’t really breaking through the poverty. What I came to realize is that it’s not dignifying to perpetually deny people in poverty their God-given ability to work.”

“What I came to realize is that it’s not dignifying to perpetually deny people in poverty their God-given ability to work.”

Pastor Petrenko’s pointed question was the impetus for Jeff’s journey into Christian microfinance – a little-known strategy at the time – which involves making small loans to people who have limited access to credit but the vision to start a business.

“While there was much I didn’t know about this approach, I believed God was calling me to step out in faith. In 1997, HOPE International became a nonprofit, and the next year, we officially disbursed our first loans to entrepreneurs in Zaporizhzhia, Ukraine.”

Since then, HOPE International has loaned more than $1.4 billion dollars and empowered more than two million small business owners in 16 countries to use their own talents and gifts to break the cycle of poverty and provide for their families with dignity.

Despite all his pioneering ministry work, Jeff never quit his day job … because a financial engine for Hope International has always been his company, Keystone Custom Homes. On any given morning, you’re likely to find Jeff pulling into the parking lot of Keystone – which is now central Pennsylvania’s largest locally owned homebuilder – in his trusty 2007 Toyota Camry, which just turned over 310,000 miles.

“From the very beginning, Keystone was founded with the intention of giving back,” Jeff says. “We believe everything belongs to God, and we are simply stewards of what he has entrusted to us.”

It was this stewardship mentality that spurred Jeff and his family to think bigger. “Since we started the company in 1992, our family has been amazed at what God has done through Keystone, and we began to wonder, ‘How can we do more?’” Jeff says. “We asked, ‘What can we do to maximize what we give and make our company stronger in the process?’”

“What can we do to maximize what we give and make our company stronger in the process?”

Ultimately, these questions led them to the next logical step. On March 23, 2019, 89 percent of Keystone Custom Homes’ non-voting stock was given to the National Christian Foundation (NCF), where Jeff and his family have established The Hopefuls Fund (a Giving Fund at NCF) for recommending grants to Hope International and other charities they support. To commemorate the occasion, Jeff brought his whole family to take part in the official signing of the gift agreement (pictured below). 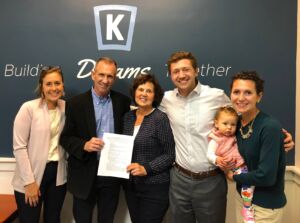 Here are a few of the things that Jeff, his son, his financial advisor, and his employees have to say about the major benefits of this decision:

Jeff is excited that the transfer of his business to charity has allowed him to “do my giving while I’m living” and to set his family up for next-gen generosity.

“I’m so thankful that I have the opportunity to be involved in this business gift at a time in my life when I can still enjoy it,” he says. “Having it owned by The Hopefuls Fund, my kids and grandchildren get to recommend who the money is given to and experience the joy of it, not the burden. I get to be a part of that and enjoy it for many years to come.”