If there’s one thing that David and Mary Swain have learned from tending the 65-year-old vineyard they own in Woodruff, SC, it’s this: It is the Lord who brings the harvest. This lesson was indelibly impressed upon their hearts when they faced a serious financial need.

“It was 2003, and my business was really hit by the economic downturn,” David says. “I had to let employees go that had been like family. We were struggling, and it looked like we wouldn’t be able to send our six kids back to the Christian school that they loved.”

As David prayed early one morning, he felt like God promised him that he would provide for the children’s tuition. So, by faith, they went ahead and enrolled them for the upcoming school year. But when they got the invoice from the school in September, their financial situation hadn’t changed. David still had no idea how they would be able to pay the school.

“I was sitting at the kitchen table,” David says, “and I literally took the invoice and slid it across the table as if I was giving it to the Lord. I said, ‘We talked about this, Lord. Right? That’s yours.’”

“I literally took the invoice and slid it across the table as if I was giving it to the Lord.”

For days, David carried the invoice in his pocket and reminded the Lord of his promise. “I even offered a few helpful ideas on how he might bring in the necessary funds,” David laughs.

One evening soon after, he got a call from the family who helped him harvest his vineyard. “Normally this is the time of year when we discover how far short we were in covering operating expenses for the year,” David says. “Honestly, I wasn’t looking forward to the conversation. But they asked me what I had done with my vines this year. I replied that had done nothing different, just the same regimen as everyone else.”

The harvester went on to explain, “In all the years we’ve been out here, we’ve never had a harvest like this. The yields from your fields are substantially larger than those of the adjoining vineyards in the area.” David was shocked to hear this. “They told me I would be receiving a large check,” David says. “Not only would it cover operating expenses; it was significantly more than we needed for our kids’ tuition. I just couldn’t believe it.”

Immediately after the call, David walked out into the vineyard, took hold of one of the vines, and looked up into the night sky. “I asked, ‘Who are you, Lord?’” David says. “I had not known him as a God who actually answers prayers like this.

“It was very meaningful, and I’ll admit, it was an emotional moment for me as I spoke with God. I knew that I was missing something in my relationship with Christ. I said, “’Lord, you taught your disciples. Would you teach me to pray?’”

That experience became a defining moment in David and Mary’s faith. “From that moment, we started pursuing God more,” David says. “We wanted to go deeper in our faith and learn to trust him more.” 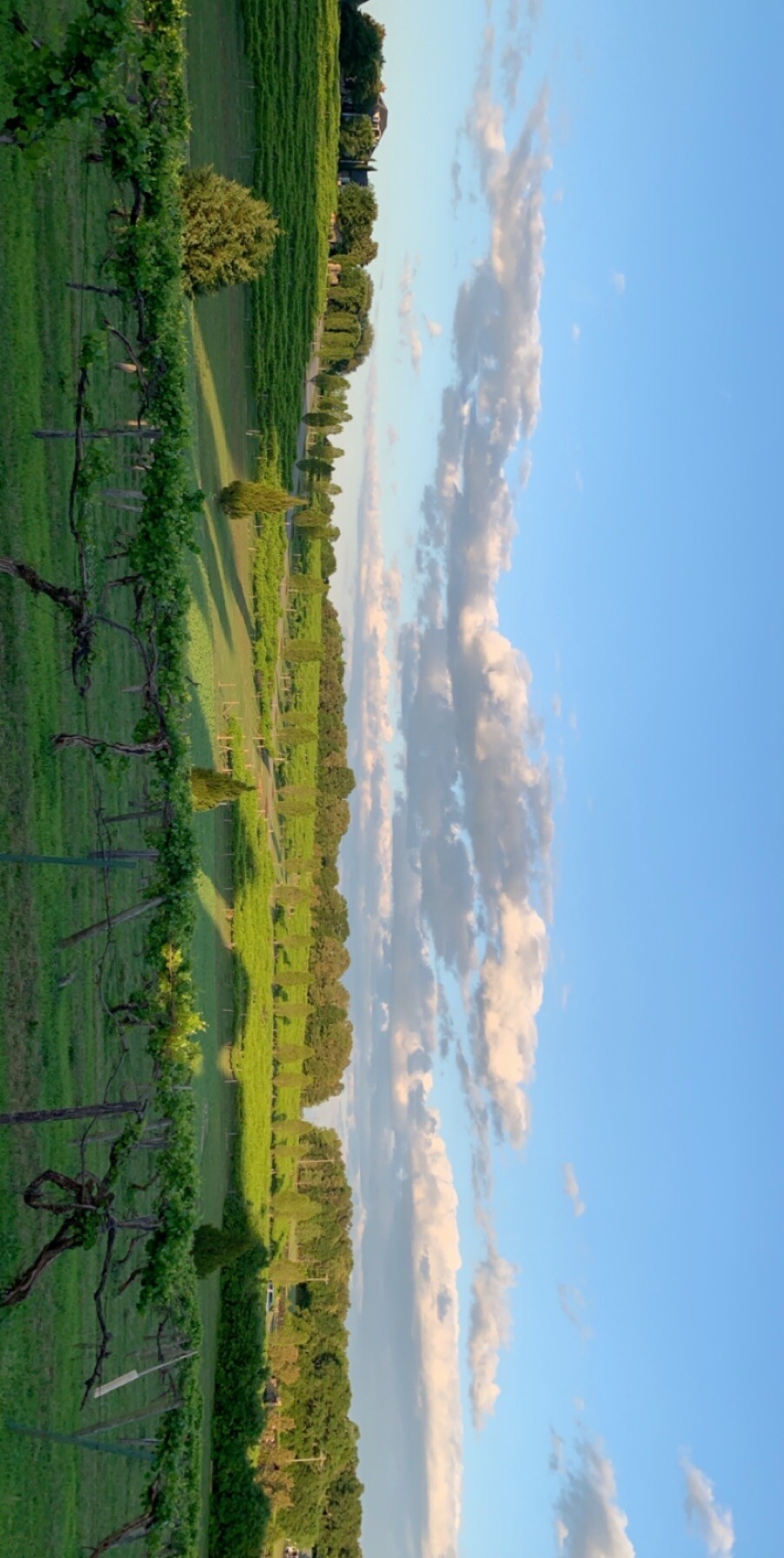 A few years later, David embarked on a new business venture with his brother, Chris, who was an OB/GYN doctor. Chris saw a need for women to have immediate access to a full-time OB/GYN in emergency situations, and many hospitals had not appropriately addressed this need. Delays in care in crucial moments could be very serious. Chris had begun to develop a new model for an around-the-clock emergency OB department.

So in 2008, with Chris’ extensive medical background and David’s business and technology expertise, the brothers decided to join forces. They created Ob Hospitalist Group (OBHG) with a mission to “elevate the quality and safety of women’s healthcare by ensuring every expectant mother the security of consistently and unconditionally seeing an OB/GYN physician when presenting to the hospital.”

Eventually, the company grew and became very successful. Their desire to be generous grew, too. “When God blessed us financially through the business, we began to ask ourselves what were God’s purposes for these resources,” Mary says. “We decided to support the causes close to the Lord’s heart – like widows, orphans, and organizations that make Christ known to the world.”

At this point, they thought about creating a private foundation to facilitate their giving. But then they met NCF Relationship Manager, Dan Glaze, and they decided to open a Giving Fund (donor-advised fund) at NCF instead.

“We loved that a donor-advised fund would take away all the headaches, administrative paperwork, and reporting associated with a private foundation,” David says. “There are a lot of donor-advised funds out there, but NCF is focused on Christian nonprofits, and we love being a part of that.”

“We loved that a donor-advised fund would take away all the headaches, administrative paperwork, and reporting associated with a private foundation.”

David and Mary also discovered that their Giving Fund helped them become more intentional with their generosity. “The Giving Fund put an end to frantically writing checks by December 31 and responding to random requests,” David says. “We can give into our Fund in one year and then take our time to pray and be intentional and purposeful in deciding which charities we’d like to support with our Fund.”

In addition to the convenience and intentionality, David also liked that their Giving Fund helped them maximize the benefits of non-cash giving. “Mary and I want to be good stewards of everything God has entrusted to us,” David says. “NCF has a whole team of charitable giving professionals, and we learned how donating part of our business to our Giving Fund would enable us to claim an income tax deduction and likely reduce capital gains tax.”

From 2010 to 2013, David made several gifts of his privately held business stock into his Giving Fund, which meant NCF had become a partial owner in the business. Then, in 2017, David gifted additional stock valued in the millions. Later, David, Chris, and NCF, as owners, accepted a lucrative offer to sell the company. Fortunately, David and Chris’ relationship with NCF enabled them to take advantage of one of the greatest opportunities for generosity that they would ever have – the sale of their business. And while David’s 2017 gift provided an opportunity to claim a charitable contribution deduction, that deduction was more than he could even use.

“When we thought about selling the company, we did a lot of soul-searching,” David says. They asked themselves, “Is this profit for us to spend? Or is there a greater purpose? Where did this blessing come from?”

“We decided it’s not about maximizing tax savings,” he says. “It’s about maximizing impact for the kingdom of God. We knew that wealth could be a curse rather than a blessing for our children. We would rather create a legacy of generosity in our family for generations to come.”

With more resources to give, the Swains looked for an even better way to facilitate their generosity. In addition to their Giving Fund, the Swains used another NCF solution called a Supporting Organization (SO). Together with NCF, they created an SO called “Building a Firm Foundation.” This unique and flexible charitable option has allowed for things like the purchase of a building which can be leased to a nonprofit. Then the lease payments and any proceeds when the building is sold can be used for further giving.

Today, the Swain family is excited to continue giving in even more creative ways, and they are in awe of how God is weaving their family’s generosity into current events.

“My family is Ukrainian,” Mary says. “Over the years, we’ve taken many mission trips to minister to missionaries in Slovakia and the Czech Republic. We are supporting missionary families in Central and Eastern Europe today who are responding now with help for Ukrainian refugees flowing across the borders.

“It’s humbling to realize that we have a role to play in this crisis.”

Fill out the form below to contact your local NCF and learn more.

Top photo and story photos: Courtesy of the Swain family

Fast and agile: What your Giving Fund can do in an emergency

You’re never too young to be generous: Here are 7 ways