If giving is worship (and we believe it is), it will likely lead us to joy. But there are a lot of things that can stand in the way of our joy when the giving gets complicated. NCF givers, Bill and Dana Wichterman explain how a little bit of budgeting can making giving easier … and more fun.

By Bill and Dana Wichterman for NCF

Not many people like to budget or keep track of their expenses. But we do. That makes us a bit … unusual.

Still, we’d like to make the case for the increased joy that comes from following a budget.

Yes, joy. Giving is much more fun when you’ve already decided how much you’ll give away that year. Donating to charities becomes a question of where to give rather than how much to give. There’s no pain in thinking about how much money you’re forgoing, because you’ve already given it away in your heart. If X percent of your money (and we believe 10 percent should be the floor, but not the ceiling, for Christians) is automatically designated to be given away, then deciding where to give feels almost like getting free tickets at a carnival.

Second, saying “no” to emotional appeals for a charity that lies outside your planned giving is less heart-wrenching. Once you have given your planned amount, it’s easier not to feel guilty about not giving. Your budget has been set, and you can feel more at peace about saying “no.” But if you don’t have an agreed upon amount to give away, then you may find yourself wrestling with every appeal.

And it’s not true that we should always give more. It’s possible to give away more money than the Lord wants – and I know people who have done just that and later regret it. All of our money belongs to God, not just the portion we give away. The Lord has given us responsibilities to pay our bills, save for the future, care for our families, etc. It may well be ungodly to give to charity what should go elsewhere. A careful, prayerful plan, well-executed, is pleasing to God.

Is it possible that the Lord might call us to change our plans and give more than we budgeted? Sure, he does that sometimes. But most of the time, a thoughtful plan that is bathed in prayer is how the Lord leads.

If you live within a budget for your lifestyle and your tithe, what about spontaneous generosity that falls in the gray area not typically thought of as charitable giving? If you’re too planned, wouldn’t that preclude on-the-spot generosity that results from compassion or awareness of a new and important need? Nope – not if you plan for that, too. We budget a specific percentage of our gross income (above our other planned giving) for spontaneous non-tax-deductible giving. That way, we can pay for a friend’s meal or anything else that wouldn’t usually be considered “charity” where there isn’t a true need. This can still be an expression of generosity. Here again, giving becomes more fun when it’s part of a responsible plan.

And we also build in flexibility with our regular planned tithe, with a portion set aside for the inevitable appeals that we can’t predict but want to respond to (short-term mission trips, etc.). If it doesn’t get used during the year, it gets added to one of our regular charities. Hence, we budget in flexibility in our planned and unplanned giving.

It’s true that budgeting still means saying “no” to spending outside the budget, and that’s never easy. But that’s what stewardship is all about – saying no to some things so we can say yes to other things.

Budgeting also extends to peace in other areas of our lives. For instance, budgeting for “unexpected” auto expenses just makes good sense, and it can help to reduce stress when our car breaks down – it’s in the budget! It also injects reality into our budgeting and make us realize how little discretionary income we really have.

There’s another cost of budgeting: keeping track of your expenses. Budgets can lie. An accurate record of actual expenses doesn’t. It’s easy to draft a hopelessly unrealistic budget, as we did the first year of our marriage. We kept thinking we could live on less than we could. But a budget based on last year’s actual expenses, adjusted for the cost of living, is far more likely to be a real budget. And it helps us confront those uncomfortable truths .. like knowing how much we really spent at Starbucks. And once we know the truth, we can better make needed adjustments. Not keeping track of expenses may be a way of shielding us from what we’d rather not know, but in the long run, it’s not a good idea.

It’s a hassle to keep track of expenses, but there are so many useful tools to help make tracking expenses easier. We use Quicken, but many software programs can help to assign categories to expenses we download from our bank or credit card account. Spending a couple of hours each month keeping track of expenses is worth the freedom of living in reality.

For the ambitious, categorizing your giving (church, evangelism, discipleship, poverty, cultural renewal, etc.) can help you decide how much to give to specific areas. We tend to give more financially to areas that receive less of our time (since giving of our time is another form of stewardship). There’s no magic formula, but examining your giving and making a plan is another metric to help you lean into the joy of intentional living.

Wise stewardship of our money is integral to following Jesus, because it is connected to the direction of our heart. Jesus repeatedly warned his followers about the dangers of misusing money. Following a budget can help us experience more joy in serving him by what we give, spend, and save. It’s not easy, but the effort pays dividends in decreased stress and increased joy. And we are promised that our planned and steady giving will never be in vain. 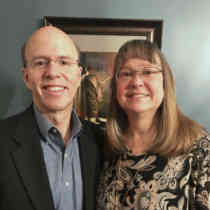 Bill Wichterman is a former Special Assistant to President George W. Bush and author of Dying to Live: Finding Joy in Giving Yourself to God. Dana Wichterman is President of Oakton Foundation and a former development economist with the U.S. Agency for International Development.