Wouldn’t it be amazing that, if someone asked you what makes your company different, you could just email them your company prayer and say, ‘Well, here’s what we hope God does through us each day?’

The men are driven by the belief that prayer is communion with God, and the fruits of prayer glorify God and his goodness in the eyes of a watching world. So it struck them that not praying for their company wasn’t really even an option.

What prompted a company prayer at Sovereign’s Capital?

William says he read a story in Tim Keller’s book Prayer: Experiencing Awe and Intimacy with God. Keller’s wife asked him, “Imagine you were diagnosed with such a lethal condition that the doctor told you that you would die within hours unless you took a particular medicine – a pill every night before going to sleep. Imagine that you were told that you could never miss it, or you would die. Would you forget?” She was talking about prayer. And it became that medicine, what the Kellers needed to survive in the tough world of ministry. They weren’t going to make it without it. Tim Keller says that in the 12 years since his wife asked him that question they haven’t missed a night of praying together, not even once.

That story left a mark on William. So did the idea of praying for his work. As William relays it:

This idea of a company prayer – all the followers of the Way in and associated with the organization praying the same thing together each day – just wouldn’t leave my mind. So, we spent some time at Sovereign’s Capital praying to God about what he would want us to ask him each and every day with regards to our work and the company he has allowed us to steward. We took some parts from some of our favorite daily prayers (most notably from John Eldredge’s Daily Prayer). Other parts are specific to Sovereign’s Capital.

William encourages others who are thinking about writing their own company prayer to “sit down in the quiet and ask God what he truly wants to do through your company, and then simply write it down. Don’t be afraid to find other great prayers out there, [which are] great places to start.”

What’s in the prayer?

“Now, we start each partner call with this prayer, and most members of the team pray this each morning. Additionally, we have used it to guide prayer times with our portfolio companies,” William says.

Certain prayer “keys” stand out in their company prayer. First, in their words, Jesus is the “Hero.” So the stance is one of humility, asking for forgiveness for sins, and seeking discernment.

The prayer also invokes the name of Jesus. Three times in John 14-16 alone, Jesus encouraged his disciples to pray in his name. Jesus’ lordship is also ushered in: “We now bring the authority, rule, and dominion of the Lord Jesus Christ and the full work of Christ over our work today” (Matthew 28:18). And the prayer applies the full armor of God (Ephesians 6).

Next comes a kingdom-focused and Spirit-directed prayer, spoken as believers co-laboring with God. Unity is another strong theme – unity with the Holy Spirit, and the prayer itself as a unifier among employees. William observes: “We at Sovereign’s have found great power in it. There is something powerful about everyone in the organization asking the same things from God each day.”

Last, an “other-orientation” resonates. There are petitions for current, and even future, team members, affiliated portfolio companies, and the communities in which they work, seeking to bring God’s blessing to every corner of their work world. Finally, there is the prayer that there will be “only the love of God between us.”

What does a company prayer achieve?

William describes how their prayer gets everyone on the same page, spiritually and mentally. It is “helpful on those mornings when I can muster very little of my own prayer thoughts. This guides me into the presence of the Lord and into the community of the saints.” The prayer could also help believers focus on God’s sovereignty and his desire to hear from and help his children, in the workplace or even in family/personal struggles or world events.

Many Christian businesspeople believe their workplace is a daily mission field, ripe for the harvest. And theories abound as to how to effect godly change there, practically speaking. For William and colleagues, their company prayer is paramount: “We firmly believe that transformation happens in the marketplace, but as with anything, we must ask, we must seek, and we must knock. We believe prayer is the key to opening that door.” 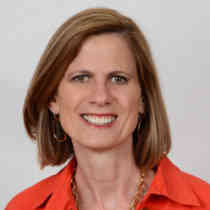 Business writer and strategy consultant, Karen Caswell simplifies complexity to facilitate wise decision-making, growth and innovation. She’s worked with or for Fortune 500 and private companies, startups, and nonprofits – many faith-based. Her career includes five years in the UK and Europe. Other passions are (alma mater) Duke basketball and volunteer work.