“Go and make disciples of all nations.” These were some of Jesus’ last words on earth. We know this Great Commission is a call handed to every follower of Jesus, not just for a chosen few. It’s a call for all believers … in every church and every country … for all generations.

Jesus’ command to reach the lost is as urgent today as it was for the first century Christians. Today, we’re living in exciting times, because, for the first time in history, we have the access and opportunity to see every nation, tribe, people, and language reached with the good news of Jesus in our lifetime. However, there are challenges and barriers we can only break by working together.

Even today, 2000 years after the resurrection, there are still hundreds of people groups with no believers, thousands of languages with no Bible, and millions of places with no body of Christ. This means that there are billions of people who will go into eternity separated from Jesus, unless the global church rises up and accepts the mandate we were given 2,000 years ago. We’re living in a time in which communication, translation, and transportation can reach into the most isolated and ignored people on the earth, people who have never heard.

This year, I had the privilege of accepting the leadership of Finishing the Task, a network of more than 1,600 organizations, which brings the global Church together to share learnings and stack hands on how to reach the peoples and places. Saddleback Church has hosted the annual Finishing the Task Conference for the past five years, convening the major church leaders and mission practitioners focused on encouraging the “adopting” and “engaging” of every people group with no believers, no Bible, and no body of Christ.

God gave John the apostle a sneak peek of what heaven was going to look like. In his old age, John saw things guaranteed by the Word of God, so nothing’s going to stop them from happening. In Revelation 5:9, John says he heard them singing a new song with these words:

“By your blood you ransomed people for God from every tribe and language and people and nation ….”

Who is included in that? Everybody. Everybody’s included, and one day in heaven there will be people from every tribe, every language, every people, and every nation. (How does God define a “nation?” Find out more here.)

In case we didn’t believe it or see it the first time, John says it again in Revelation 7:9: “After this I looked, and behold, a great multitude that no one could number, from every nation, from all tribes and peoples and languages, standing before the throne and before the Lamb ….” Can you imagine what that will look like? The number can’t be counted – so many from every nation, tribe, people, and language.

These four categories that John mentions twice, are not accidental. They’re intentional. There are going to be people from all four of these categories in heaven. That’s a bigger vision than just your people … just your nation … just people like you … your kind of folk.

Where do we stand?

There’s another group, we call UUPGs (unengaged, unreached people groups), groups with no believers, no Bible, no body of Christ. According to Finishing the Task, today there are still 261 of these unengaged people groups. We know who and where these people are. Why haven’t we gone to them with the gospel? Even though these remain groups as small and located in remote, difficult places, they are included in the promises God’s has made to every nation. We have to reach every one of them with the gospel.

In addition to these unreached and unengaged people groups, there are thousands of languages around the world with little or no access to the Bible in their heart languages. Every major language in the world has the Bible, but now that we’re down to finishing the task, most of the remaining languages have just 50,000, or 70,000, or 100,000 people. Finishing the Great Commission will require that we make the Word of God available in all of these languages, no matter how small.

Last, there are millions of villages, neighborhoods, and suburbs around the world where there is no Body of Christ – no church. Because the local church is vital to the formation of disciples, we need to ensure that there is a church within walking distance of every person on earth. Achieving that will require us to plant millions more churches around the world.

What will it take?

So, what’s the problem? Motivation. We don’t care enough about those people. If we cared, we would already be doing everything in our power to reach them with the gospel.

So what will it take for us to finish the task, to get to these final groups that don’t have the believers, the Bible, or bodies of Christ?

1. We must speed up the task of Bible translation. The Bible says in Psalm 68:11, “The Lord gave the Word and great was the company of those that published it” (KJV) Publishers of the Word of God are needed today. Thousands more translations are needed.

Ecclesiastes 11:6 says to do your planting in the morning and in the evening, too. In other words, do it all day. “You never know whether it’ll all grow well or whether one planting will do better than the other” (GNT) This is the principle of sowing widely. Spread the seed as many places as you can.

What we’re talking about here is called saturation evangelism. It’s using every available means, to reach every available person at every available time. The Bible says, “Let us not become weary in doing good, for at the proper time we will reap a harvest if we do not give up.”

4. We must use “near neighbor” strategies in hard-to-reach areas. There are some areas in the world where a “foreigner” could never get in. Many of the unengaged and unreached people groups are in restricted nations like Sudan. That’s not an easy place for someone like me to get into. Local church members near to these hard-to-reach peoples are often already connected with people from that people group. They know them from the marketplace and share cultural similarities and secondary languages. In his third letter, John says, “Therefore we ought to support people like these, that we may be fellow workers in the truth” (verse 1:8)

Does anybody deserve to hear the gospel twice when there are some who haven’t heard it for the first time?

I want you to prayerfully ask God how you can personally help finish the task. He may ask you to do something that is so big it might scare you. I don’t know how God might lead you. But if we will all do the work God has prepared for us to do, we can be the generation that finishes the task of completing the Great Commission.

We are within reach of turning these peoples and places with no believers, no Bibles and no bodies of Christ into people groups with the eternal hope of Jesus Christ! Imagine arriving in heaven and seeing people come to thank you for helping to bring the Good News to them. You can help make that happen. 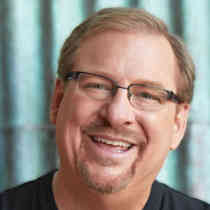 Rick Warren and his wife Kay consider it their life’s work to empower local churches and local leaders to create sustainable change that gives a voice to the voiceless and help to the helpless. Rick is the founder and pastor of Saddleback Church, the author of The Purpose-Driven Life, Director of the Global PEACE Plan and a voice of wisdom, hope, encouragement, and vision.