From Genesis to Revelation, God’s Word declares his heart and his plan for the nations. In Genesis, he promises Abraham: “Through your offspring all nations on earth will be blessed, because you have obeyed me.”

God’s promise was that Jesus Christ, the Messiah – Abraham’s ever-so-many-greats grandson – would be a blessing to all nations on the earth.

Then, near the end of the Bible (Revelation 7), John records what the Lord shows him in a vision: “a great multitude that no one could number, from every nation, from all tribes and peoples and languages, standing before the throne and before the Lamb….” John saw men and women from “every nation” gathered around the throne of God giving him praise. The implication is that the gospel promise of salvation by grace through faith in Jesus Christ will be available to every nation on earth – not one will be left out.

God told Abraham, “Through your offspring all nations on earth will be blessed, because you have obeyed me.”

When William Carey introduced the idea of world evangelism around 1800, the idea was to take the message to every country: to India, China, and so on. But in 1974, Dr. Ralph Winter, one of the great mission leaders of the last generation, introduced the global church to people-group thinking. His breakthrough idea was that the word “nations” in the New Testament – the Greek word is ethnos – referred not to modern countries but to ethno-linguistic people groups: groups of people who share a common language, culture, heritage, and ethnicity. So when Jesus told his church to “Go therefore and make disciples of all nations,” he was telling us to take the gospel not just to every country, but to every one of the world’s people groups.

One of the great mission leaders of the last generation introduced the idea that “nations” in the New Testament (from the Greek Word ethnos) referred not to modern countries, but to groups of people who share a common language, culture, heritage, and ethnicity.

The experts tell us that there are about 12,000 biblical “nations” on earth today – an astounding number! Some modern countries have only a few nations, but some have many: Nigeria has more than 450 nations within its borders; India has at least that many; and Indonesia has more than 300. And God has commanded us to take the gospel to every one of them!

People groups are categorized as reached, unreached, or unengaged, based on the depth to which the gospel has penetrated their populations. Reached groups have significant numbers of believers and churches. Unreached groups have some believers, but not many – fewer than 2 percent of an unreached group’s total population is Christian. Thousands of people groups around the world with a total population of billions remain unreached, and extending the reach of the church in these groups is a major priority.

Unengaged, unreached people groups – also called UUPGs or simply unengaged groups – are completely cut off from the knowledge of Christ and the gospel. These groups have no known believers, no Bible translated into their language, and no body of Christ – not a single church in the whole people group. Perhaps the most heartbreaking of all, no one is even trying to reach them. To become “engaged,” these groups need full-time Christian workers, living among them, ministering to them in a local language, doing evangelism, and planting multiplying churches.

For nearly 2000 years, people have been born and died in these unengaged people groups without ever once having a chance to hear the gospel. They’ve lived hopeless, purposeless lives, trapped in superstitious, oppressive religious systems. They’ve never known the joy and the freedom that comes from a relationship with Jesus Christ. They’ve never experienced the forgiveness, honor, and power that comes from the gospel of peace. After 2000 years, isn’t it time they all heard?

For nearly 2000 years, people have been born and died in these unengaged people groups without ever once having a chance to hear the gospel.

In recent years the attention of the church has turned toward the needs of the unengaged. At the Amsterdam 2000 Billy Graham Conference on Evangelization, the attendees – mostly key leaders in organizations and denominations – heard that, after nearly 2000 years of missionary effort, there were still thousands of people groups with no Christian witness. They were challenged to commit to go to those groups with the gospel. One key group of leaders, representing some of the world’s largest Christian organizations (identified by their table number at the event, Table 71) committed to work together toward the day when there would be no unengaged, unreached people groups left in the world. They have met together more than 55 times since Amsterdam 2000 to pray for and plan the effort to “make disciples of every nation.” Born out of their collaboration, the Finishing the Task Network now mobilizes the global church to engage the unengaged.

In parallel to the Table 71 effort, the Holy Spirit began raising up a number of networks of mission leaders, including Ethne, Vision 5:9, 24:14, and hundreds of regional networks like the Mongolian Partnership and the Blue Mediterranean Network of the Middle East – working cooperatively to get the gospel to every people group on earth. More than any time in history, Christian leaders are finding profound joy in working together for the cause of the kingdom.

As a result of this work, the number of unengaged people groups has been rapidly declining. According to data provided by Finishing the Task, in just the 14 years between November 2005 and October 2019, 409 organizations have sent 29,500 full-time workers in 4,957 teams to engage 3057 unique people groups for the first time with the gospel! They have planted 139,671 new churches and report 3,237,647 believers among these groups.

Thanks to this progress, today there are only 261 people groups with populations of more than 500 people that remain unengaged. What’s more, the pace of engagement is running at hundreds of groups per year. We praise God for what has been accomplished, and we celebrate being so close to this first finish line in this Great Commission race!

But there is still work to do. The remaining groups remain for a reason: They are among the most remote and/or hostile groups in the world. Going to them and engaging them with the gospel will be challenging. Of these, 51 are Deaf groups in various countries, and engaging these groups will require special techniques and workers. But the global church is on the move, the Holy Spirit is working ahead, and by God’s grace we may be only a few years away from the finish line of “disciples in every nation.”

“This gospel of the kingdom will be proclaimed throughout the whole world as a testimony to all nations, and then the end will come.”

In Matthew 24:3, Jesus’ disciples asked him a direct question: “Tell us, when will these things be, and what will be the sign of your coming at the end of the age.” A few verses later, in Matthew 24:14, Jesus gave them this answer: “This gospel of the kingdom will be proclaimed throughout the whole world as a testimony to all nations, and then the end will come.”

When will Jesus return? He said, not until the good news has been preached to “all nations.” So that’s what we need to do: take the gospel to the last few biblically defined nations who have never heard it. And when we’ve done that, ours could be the generation to experience the return of our Savior. 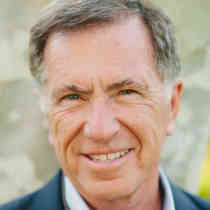 Paul Eshleman is Vice President of Networks and Partnerships for Cru (Campus Crusade for Christ International). He founded The JESUS Film Project and served as its Director for 25 years. He is President Emeritus of the Issachar Initiative, an advocacy network seeking to bring awareness through vision summits for ministry and marketplace leaders, and Director Emeritus of the Finishing the Task Network, encouraging ministries and churches to send full-time workers to the remaining unengaged, unreached people groups throughout the world who have never heard the name of Jesus.

Inviting the world to coffee: A couple's commitment to refugees