Five years ago, Adam LaRoche didn’t know what human trafficking was. Today, he’s risking his life to save its victims.

“One evening after practice, he shared his life story with me and unfolded the human trafficking horrors currently being fought in Thailand,” LaRoche said. As a Christian and a father himself, LaRoche couldn’t shake what he’d heard. He began researching human trafficking, learning all he could.

As soon as the 2014 season ended, he and Boyer flew to Thailand to meet up with the nonprofit and work on the ground helping local law enforcement combat sex–trafficking rings.

Posing as customers, LaRoche and Boyer visited about a dozen brothels a night. “Americans have access to places locals don’t. When people see Americans, they see dollar signs, and they let us in,” La Roche said. Our role was to prove that the girls – some incredibly young – were not acting on their own.”

The next day, they would hand over their evidence to local law enforcement, who would develop a case, rescue the girls, and lock up the traffickers. At times, the work was defeating. “One brothel closes and another one pops up a block away. It seems like a never–ending challenge. And some of the girls go right back into prostitution.”

Human trafficking is the world’s fastest–growing illegal business, turning a profit of approximately $32 billion, according to Forbes Magazine. “More and more drug dealers are leaving the drug trade and moving into the sale and exploitation of young girls,” LaRoche continued. “Illegal drugs are consumable, and supplies must be replenished. Humans you can sell over and over again.”

No doubt LaRoche and Boyer put their lives in danger. And they continue to do so today. But LaRoche doesn’t let the prospect of harm interfere with God’s work. “Jesus didn’t tell his disciples to go into the world ‘unless it’s dangerous.’ He called all who follow him to help the oppressed and be a voice for the voiceless. The way to truly grow our faith is to put ourselves in a situation where we’ve got to rely totally on our faith.”

Jesus didn’t tell his disciples to go into the world “unless it’s dangerous.” He called all who follow him to help the oppressed and be a voice for the voiceless.

LaRoche, now retired from baseball, devotes his life to his family and their ministry, the E3 Foundation, which supports dual missions – fighting human–trafficking and serving American veterans.

E3 funds week–long retreats for wounded veterans at the LaRoche ranch. The veterans, many suffering from post–traumatic stress disorder or depression, immerse themselves in nature’s peacefulness. They may go horseback riding or turkey hunting. Some find Jesus. Some have even been baptized in the LaRoche pond.

On the trafficking side, the ministry assists and contributes to a number of groups: International Justice Mission, SERT Ministeries, Operation Underground Railroad, The Guardian Group, and other organizations that operate under the radar to help disrupt the business model of human trafficking. LaRoche has worked with all of these organizations personally.

Most of the funding for the ministry comes from the LaRoche family’s own businesses, primarily spinoff, for-profit businesses: an all–natural beef company, two restaurants, an apparel line, and a brand of beef–based, all–natural dog treats. “We try to raise most of the funding internally, because I’m absolutely awful at asking for money,” LaRoche says.

Boyer introduced LaRoche to the National Christian Foundation when he started E3. “They gave us great guidance on the dos and don’ts of operating a nonprofit. They take a ton of paperwork and behind–the–scenes red tape off our plate. It’s like having access to nonprofit lawyers whenever you need it.”

Today, most of the human–trafficking operations LaRoche goes on are in the United States.

“Early on, I thought human trafficking was just a third–world issue,” he admits. “But when we got back from our first trip to Thailand, we quickly realized it’s a huge issue in the United States.”

Early on, I thought human trafficking was just a third–world issue …. We quickly realized it’s a huge issue in the United States.

The work LaRoche does in the US is different from what he did in Thailand, though. Often, US law enforcement doesn’t have the time, training, or resources to investigate human–trafficking cases. Looking for opportunities to help, LaRoche became a sheriff’s deputy in the county where he lives. This allows him to attach to other law enforcement agencies and help them locate victims and their traffickers.

“It’s not the ‘snatch–and–grab’ that you automatically think of. Vulnerable girls, who are either runaways, in the foster system, or have a bad home life can be blinded by professional human–trafficking recruiters [who are] young, good–looking, college–age guys. They think the guy is going to rescue them.”

Once in, it can be impossible for girls to get out. Suffering from severe trauma, victims may need up to 16 months or more of mental rehabilitation in a safe house to develop some sense of self–worth and to get off drug addictions forced upon them.

It doesn’t matter to LaRoche how long it takes to complete a rescue. “If we have to work six months to save one girl, I know in Jesus’ eyes, she is worth it,” he says. 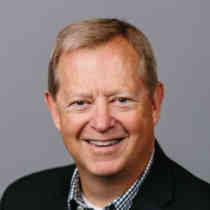 Paul Forbes is vice president and national relationship manager for NCF. He partners with givers, business owners, leaders, and their families to explore their calling, help with succession and estate planning, and identify opportunities to increase giving with tax-advantaged gifts.