A large, rough-hewn wooden sign hangs on the wall of the offices of David Pursell’s premier leisure farm resort and golf course: “Live now for what will matter then.”

This plainspoken principle resounds in everything the family does. For this family – from Jimmy Pursell, the 85-year-old family patriarch, to their adult children, Taylor, David, and Chris – the simple motto sums up the family’s generous idea of living beyond themselves and their own generation. It’s their practice, as parents, of passing on to their children and grandchildren values before valuables, laying the foundation of faith. And it’s their commitment to invest in eternal rewards over temporary pleasures.

This is the Pursell legacy. And it all begins with the story of Jimmy Pursell, a small-town boy from Talladega, Alabama.

At 85, Jimmy Pursell has a mischievous twinkle in his eye as he recounts some of his favorite stories of growing up in rural Alabama with his best friend, Jim Nabors (otherwise known as The Andy Griffith Show’s, Gomer Pyle). “We got into some shenanigans,” says Jimmy. “But you know, that’s how I met my wife. Jim introduced me to her, and after that, everything changed.”

Jimmy and Chris were married in 1953, and soon Jimmy went to work in his father-in-law’s fertilizer business. With an outgoing personality, Jimmy was a natural salesman. He quickly expanded his new division of the company, the Sta-Green line of lawn and garden fertilizers.

In the mid-1960s, after the passing of his father-in-law, Jimmy took over the company. He began to innovate and developed a line of controlled- release fertilizers. They developed and patented a polymer-coated fertilizer called POLYON and became one of the largest producers of coated fertilizers in the world.

As the Pursell business was reaching a milestone in the ‘70s, the family’s faith hit a turning point, too. As members of their local Episcopal church, Jimmy and Chris had always served, tithed, and taken their children to church. But then the Jesus Movement swept across the campus of Auburn University, reaching Taylor, the Pursells’ oldest son. Taylor brought his college Bible study leader, John “Rat” Riley, home to meet his father. Jimmy was so intrigued by John’s teaching that he offered to hire Riley to speak full-time, including weekly sessions with his employees. Jimmy’s faith came alive as he began to see his business as his mission field. His whole family committed their lives to Christ. And in 1976, Jimmy also committed his company to Christ and Christian principles, with generosity as one of the key evidences of God’s work. “My father gave the thing he loved the most, his business, to God,” David explains. “And God blessed him.”

Jimmy’s faith came alive as he began to see his business as his mission field.

In 2001, David relocated the headquarters of Pursell Technologies to the family farm 10 miles away and developed a new marketing strategy using the picturesque 3,200-acre property. He built FarmLinks Golf Club, a 7,444-yard, par-72 Hurdzan-Fry research and demonstration course to showcase their innovative fertilizer products to golf course superintendents. They also offered these guests home-cooked meals, fishing, and relaxation in the 14,000-square-foot Parker Lodge. More than 10,000 top golf course superintendents came to enjoy the Pursells’ wholesome hospitality.

From Fertilizer to Farm Resort

In 2006, the family sold the fertilizer business but kept Pursell Farms, which has become a world-class golf and leisure resort. They operate the FarmLinks golf course, the Orvis Shooting Grounds at Pursell Farms, and deluxe accommodations for business meetings, ministry retreats, weddings, and couples’ getaways. David explains, “Now we’re in the hospitality business, which is where God was leading us all along.”

At the center of their hospitality, David says, are four pillars of faith in business: their “relentless pursuit” of honoring God; respect and support for their employees; bending over backwards to make guests feel welcome; and honoring their owners (mom and dad). “We honor the hard work and sacrifice that my parents made to get us here.”

The Next Generation of Giving

To carry on his parents’ legacy of generosity, David and his wife, Ellen, have involved their children in giving. They use a unique tool from the National Christian Foundation, the Giving Fund (donor-advised fund).

When each of their six children were between 16 and 18 years old, they gave them a Giving Fund with $5,000 as a Christmas gift. The children were instructed to research charities and give the money away as they saw fit. The following Christmas, David asked about their funds. He discovered that three of his kids hadn’t given anything, two had given a little, and one had given it all away. He used this experience to teach them a biblical principle (Matthew 25:14-30). He explains, “I said, ‘Okay, to you that has given it all, I’m going to completely refresh your fund. To you three that haven’t given anything, I’m not giving you anything more.’ All of a sudden, they got busy giving.” 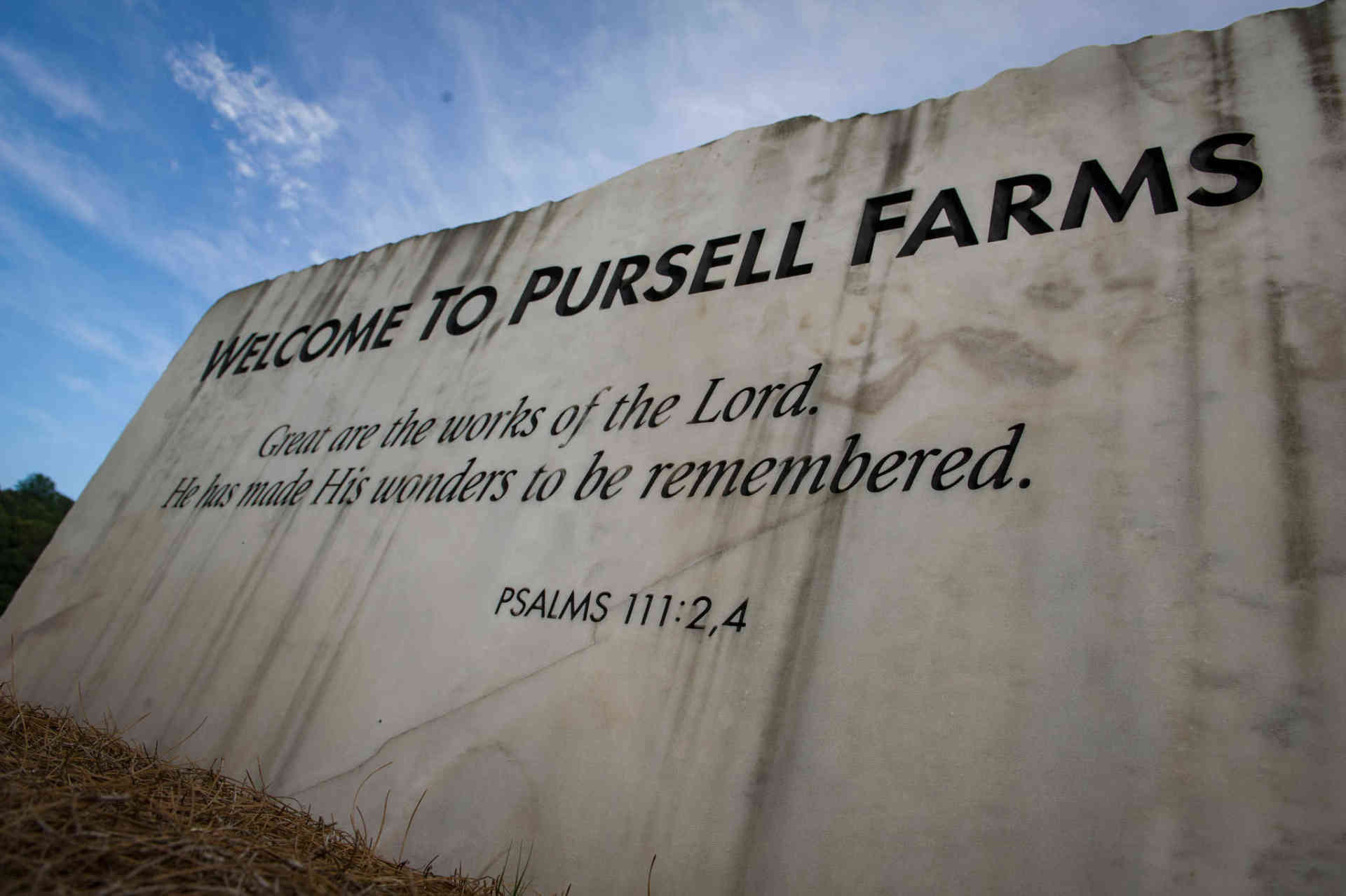 When people enter Pursell Farms, they don’t just see a beautiful golf course. They see signs of a family that loves God.

Partnering to Make a Difference

In addition to giving away much of their corporate earnings, David has created a meaningful corporate partnership with Vapor International, a ministry close to his heart. Traveling with Vapor on an international mission trip, David got to know its founders, Micah and Audrey McElveen. “I saw a genuineness and detachment from materialism that stuck with me.”

David was moved by Micah’s incredible personal journey that stemmed from a near-death surfing accident in 1995, which resulted in a broken neck. As a lifelong athlete and football player, Micah wasn’t even sure if he’d ever walk again. But during his intense recovery period, Micah says, “God reshaped my priorities and taught me that life is but a vapor.”

Micah made a miraculous recovery but was unable to return to football. So, he started playing soccer, which came in handy when he traveled to Africa and played with street children living in extreme poverty. Soon, a vision began to take shape to use soccer as a means to minister to children in third-world communities.

David met Micah at the perfect time to invest in his dream. “I had just sold the company and made a lot of money,” David says.

“I recognized Micah’s need for things that I have here. We donated land, and they built right outside the front gate of the farm.”

David and Micah’s close relationship has led to a fruitful connection between Pursell Farms and Vapor International. “Micah and I have connected spiritually, and we hold each other accountable,” David says. “I serve on his board, and we support them every month with major gifts. Having Vapor located here on the farm means that the more successful we are, the more Vapor will become known. Our employees and guests love knowing that they’re helping children a world away.”

Just like the plaque in David’s office, there are signs of God’s presence everywhere you look at Pursell Farms, from the ministry sign that leads the way to Vapor International headquarters to the tall wooden cross atop of one of the farm’s highest peaks. But David’s favorite sign says it all. “As you drive in, we have a large welcome sign with Psalm 111:2 and 4: ‘Great are the works of the Lord. He has made His wonders to be remembered,’” says David. “That is what we want visitors to see when they come here. We want them to not only see the great golf course, or the great food, or the great service, but we want them to see God through His magnificent creation.”

At NCF, we know you want to be a good steward of all God has entrusted to you. That’s why we come alongside you with shared biblical values, innovative charitable solutions, and highly personalized service so you can give more strategically and with greater purpose. Since 1982, generous givers at NCF have mobilized more than $16 billion for 71,000 churches, ministries, and charities.

How we judge other people’s generosity – and why it matters