And Jesus answered them, saying, “The hour has come for the Son of Man to be glorified. Truly, truly, I say to you, unless a grain of wheat falls into the earth and dies, it remains alone; but if it dies, it bears much fruit.” – John 12:23-24 NASB

There must be a death before there can be fruit. A seed is buried in the ground before it returns to life and bears fruit. This is why Jesus Christ is still fruitful after nearly 2,000 years. His death was meant to bear fruit, and it has. The fruit of his life-change is represented in billions of lives that have been altered for eternity. Transformation took place because of death, for it is the soil for life.

The death of Jesus Christ advanced God’s plan. No one close to Jesus wanted Him to leave. How could anything come from losing the One who had given life, healed the sick, and taught with riveting truth? It didn’t make sense that he had to die. He was just getting started. Why put the brakes on the momentum that was occurring in that part of the world? Yet still today, there are those who mock the death of Jesus and say that he was just another prophet martyred for his faith. However, death was God’s plan to give life.

But Jesus was much, much more than just a martyr. He was the Son of Man, but he was also the Son of God, who died as the payment for all past, present, and future sins of mankind. This is where the fruit of faith begins. When you believe that the death of Jesus was predestined by God as a good thing, then you have a foundation for fruit-bearing. Yes, all things do work together for good (Romans 8:28).

The cross of Christ is one of God’s good things, so make sure you thank Him for the sacrifice of his only Son. He gave life so we could receive life. When you believe in his death for your sins, you receive his life. Christ in you has put to death your old life, so now that you have been crucified with Him, you are positioned to bear much fruit.

This is why you die daily. You die to yourself so you and others can live for God. Fruit results when you deny yourself and remain in Him. Jesus said, “Remain in me, and I will remain in you. No branch can bear fruit by itself; it must remain in the vine. Neither can you bear fruit unless you remain in me” (John 15:4). What is something to which you have not died that may be holding back your fruitful living?

If you do not die, you remain alone. To not die to self and sin is to separate yourself from fruit, friends, and faith. But you do not have to remain alone. On the contrary, daily death by faith frees you to experience fruitful living. The fruit of your other-centered living becomes abundant and ubiquitous. You pollinate other lives that, in turn, bear fruit. However, death is not always easy. The road to crucifixion with Christ may be wrought with criticism from those who think you are too religious or a little weird.

However, the fruit from your life will speak for itself. Your children’s love for God will resonate for eternity. Your generosity will silence even the most outspoken critics. Your teaching will transform lives in the here and now. Fruit is God’s eternal evidence that motivates you to remain faithful to Christ. Therefore, stay dead to yourself, and watch Him live through fruit-bearing. Death’s fruit is rooted in the cross.

Prayer: Heavenly Father, thank You for the gift of Your Son’s life, so I might have life, in Jesus’ name, amen. 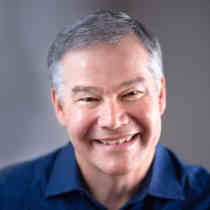 Boyd is President of the Georgia division of the National Christian Foundation and the founder of Wisdom Hunters, Inc., an Atlanta-based ministry created to encourage Christians to apply God’s unchanging Truth in a changing world. Boyd enjoys mentoring and encouraging others, especially his wife Rita and their children and grandchildren.