The Bible is more than just a book – it is God’s Word to us! And it should be available to everyone in a language and form that clearly speaks to their hearts. Today, though, there are still approximately 3,800 languages around the world in which people have little or no access to God’s Word.

In February 1998, I came to better understand this injustice. On a plane to Guatemala to visit a Bible translation project underwritten by my family, I was told that the translation had taken 40 years to complete. Even worse, I learned that only 400 of the 1,000 known believers who spoke the language could read. Being a business guy, I was disappointed. What kind of return on investment is $20,000 for just 400 people?

When we finally made it to our destination, I met the translators who’d been there for 40 years, along with four Eastern Jakaltek (hah-ckle-teck) believers, including a man named Gaspar. When Gaspar came forward to receive his copy of the Jakaltek Bible, he did something I’d never seen anyone do before: Gaspar wept over the Bible. I was taken aback.

When Gaspar came forward to receive his copy of the Jakaltek Bible, he did something I’d never seen anyone do before: Gaspar wept over the Bible.

I’d never heard God speak audibly to me, but I felt the Holy Spirit prompting me with a question, “Why don’t you go tell Gaspar he’s not a good return on investment?” That was a defining moment for me, because I went from asking why – “Why would anyone spend 40 years of their life to do this?” – to how – “How are we going to make sure everyone has the Word?”

At 2 a.m. the next morning, I couldn’t sleep, so I picked up a Kay Arthur book I had brought on the trip. As I started reading, I read, “Being in God’s Word and knowing it for yourself is the key.” It was a simple statement. Suddenly, another question came into my spirit: “What kind of return on investment is Mart Green?”

I’m a multi-generation Christian who doesn’t miss church. At that time I owned I 10-15 bookstores. I had just paid for printing of the Bible Gaspar wept over. I personally owned about 50 Bibles. Yet, I didn’t read God’s Word on any kind of consistent basis. At that moment, February 8, 1998, I vowed to the Lord that for the rest of my life I’d get up first thing every day and read God’s Word.

“Why don’t you go tell Gaspar he’s not a good return on investment?”

That was when the Bible came alive to me. I committed to love God intimately and live with extravagant generosity providing his Word to as many people as I could.

All around the world, people are crying out for Scripture. They are desperate to know Jesus. Every day, approximately 19,000 people die never having heard God’s Word in their language. If nothing changes, millions will continue to step into eternity without knowing the good news. This is unacceptable.

But today, at a pace the world has never seen, God’s Word is reaching and transforming people and nations. The global Church stands on the verge of bringing Scripture to every nation, tribe, people and language on Earth.

“God wants His Word to be spread throughout the world. We are fulfilling this by translating the Bible,” observed translator Steven Piki, a member of the Mbore people group. This small group of people live near the mouth of Papua New Guinea’s mighty Ramu River. “Our people will see it, read it, and understand what it is saying about God.” The dedication of the Mborena Kam New Testament was a monumental event for the Mbore people – a powerful testimony to the faithfulness of God coupled with their own tenacity and the hard work of a Bible translation agency in overcoming countless obstacles that impeded this work almost from its beginning.

Ripples of transformation began long before these Scriptures were formally dedicated. God’s words took root in the lives of the Mbore translators as they wrestled with what they meant and how to express their meaning in their own language. The translation team included representatives from many villages, dialects, and denominations, yet they learned to work in unity to achieve their shared goal. Some contracted malaria and other illnesses, compounded by fatigue, as they pushed to cross their finish line, yet they did not lose heart. Instead, they experienced the reality of God’s great mercy in renewing them day by day.

Traditionally the Mbore people learn best by hearing rather than reading. So, providing access to God’s Word that will impact their hearts requires having it in their heart language, and in audio format. Sem was one of the men who immersed themselves in Scripture to help create the recorded version. The words impacted him deeply. When an arsonist burned his house and everything in it, the culturally expected response was for him to repay with greater destruction. But the way of Jesus he was learning pointed to a different response, and Sem chose not to retaliate. The ripples broadened.

Sem [immersed himself] in Scripture to help create the recorded version. The words impacted him deeply. When an arsonist burned his house and everything in it … Sem chose not to retaliate.

Now that the written and oral versions of God’s word are available, churches among the Mbore are able to examine their teachings and practices through the lens of God’s Word. Change is beginning to happen. More ripples.

And the work continues. The Mbore translation team is united in their commitment to translate the Old Testament Scriptures into Mborena Kam. They’re already laying the groundwork for that enormous undertaking and growing their team by adding younger men who can eventually take their places. This expanded team has already translated Jonah and is well into Genesis.

The ripples won’t stop at the boundaries of Mbore territory. The translation team wants to give God’s Word to the people groups around them – former enemies they once hunted and killed. Steven Piki will mentor heart-language translators from some of those groups. “God wants his Word to be spread throughout the world. We are fulfilling this by translating the Bible.”

Today, translation work is underway for 1,700 languages, but another 2100 have not yet even begun. Finishing all 3,800 of these languages is a huge task with great costs – around $975 million in total. The goal is formidable, but the work must be completed.

Thankfully, by God’s grace, the work is accelerating. New technologies like Render Software, created by Faith Comes by Hearing, which enables audio to audio translation, and exciting new translation methodologies are reducing the time required to complete translations. Finally, through a partnership called IllumiNations, 10 leading Bible translation agencies have come together to tackle the remaining work – a remarkable demonstration of the unity that Jesus prayed for his church in John 17.

Together, we envision that every man, woman and child on earth will have access to God’s Word and its life-changing hope by 2033.

Every day, with increasing speed, more people are hearing and reading God’s love letter to them. And they are being forever transformed. 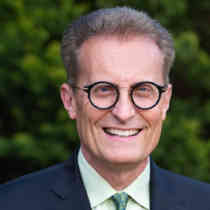 Mart Green is the Ministry Investment Officer for Hobby Lobby and is the founder of Mardel Christian and Education Supply stores. His retail career began with his parents, who founded Hobby Lobby in their home. He is also a leading champion of illumiNations, a collective impact alliance, working to eradicate Bible poverty by 2033.

All the easy places are taken: The risk of reaching the unreached